The Bank of England remains on track to raise interest rates in the first half of 2022, although it warns that significant uncertainties continue to hang over the UK economy.

The pound rallied against the euro and the dollar after the bank chose to keep interest rates and quantitative easing levels at existing parameters, but warned of the possibility that the levels of Inflation will remain high for a longer period than expected.

The British currency had fallen in the days leading up to the event, suggesting that investors feared the Bank’s Monetary Policy Committee (MPC) was setting a more cautious tone in light of slowing economic growth and the eruption of a real energy crisis since their August. Meet.

Sterling Live said in a preview article that there was a high likelihood that a “sell the rumor, buy the fact” trade was underway in the forex markets as investor caution increased.

But rising thereafter, the pound signals that the market believes the September update is still consistent with higher rates in 2022.

Since the outlook for UK interest rates has not been fundamentally changed as a result of the Bank’s update, this view of recent and ongoing exchange rate developments seems justified. 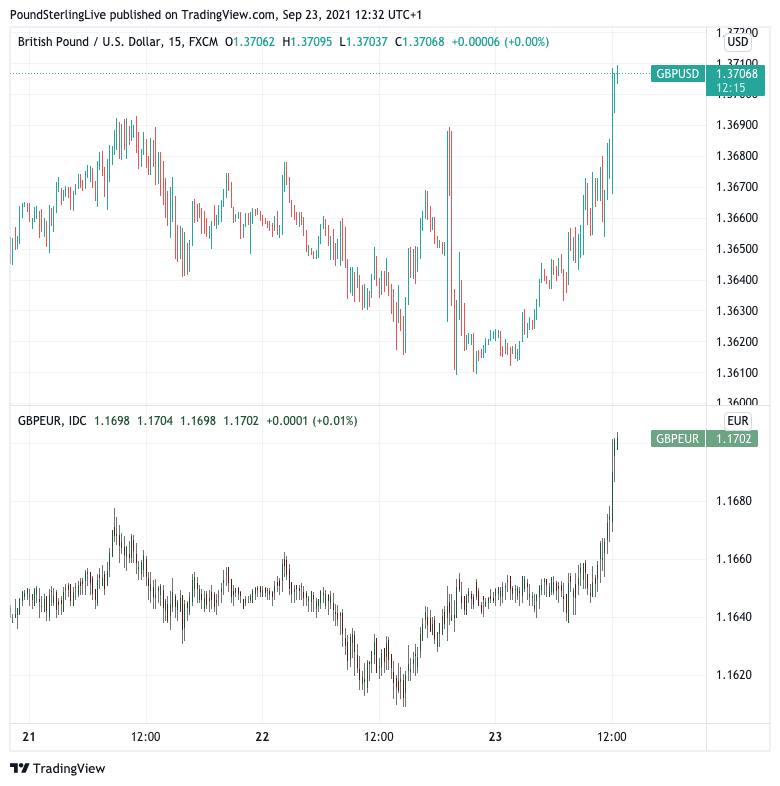 Currency transfers: get a retail exchange rate between 3 and 5% higher than that offered by the main banks, learn more. (Advertising).

The MPC voted unanimously to keep the bank rate at 0.1% and a 7-2 majority to keep the quantitative easing program at existing levels.

In a statement, the Bank said “a slight tightening of monetary policy over the forecast period would likely be necessary to be consistent with the sustainable achievement of the medium-term inflation target.”

The statement largely endorses existing market prices for the rate hike to take place in the first half of 2022.

“Some developments during the interim period appear to have strengthened this case,” the statement said.

But, the statement was by no means a “hawkish” surprise, as the MPC said considerable uncertainties regarding the global economy and domestic labor markets remain.

Therefore, the pound is likely to regain recently lost ground instead of forging its way to new highs in 2021.

Bank economists have downgraded their expectations for the level of UK GDP in the third quarter of 2021 by around 1% since the August report, leaving the expected level of third quarter GDP at around 2½% below its pre-Covid level.

This downward revision was blamed on supply constraints: this is important given that some economists recently said that demand restrictions were the cause of the recent slowdown in growth.

The MPC is more likely to go ahead and meet market expectations and raise rates if they feel demand remains robust and supply restrictions are transient.

The MPC nonetheless said it would closely monitor incoming evidence regarding labor market developments, and in particular unemployment, broader measures of underactivity and underlying wage pressures; the extent to which firms pass on increases in wages and other costs, as well as medium-term inflation expectations.

The MPC reflects global growth since August and inflation has remained high amid strong demand for goods and persistent supply constraints.

The Bank also warned that inflation could stay high above its 2.0% target on a “more persistent” basis.

They estimate that CPI inflation will rise further in the near term and exceed their existing forecast by 4.0% for the fourth quarter of 2021, but say this is largely due to the development of energy and fuel prices. goods.

They discussed the evolution of the energy crisis, saying that a significant increase in wholesale spot and forward gas prices since the August report represents an upside risk to the MPC’s inflation projections from April 2022.

But the Committee’s central expectation continues to be that current high global cost pressures will prove to be transient.